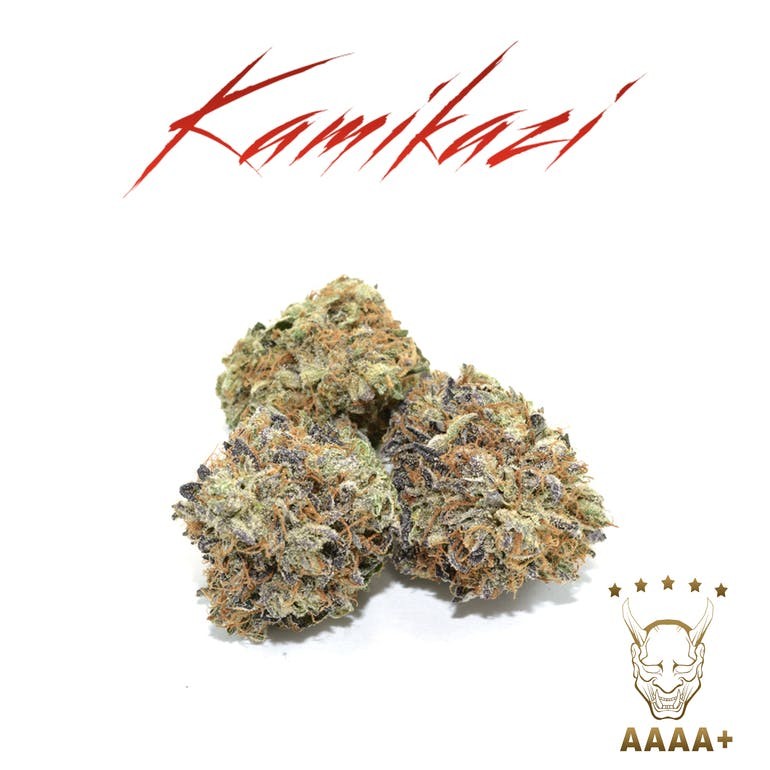 Pink Death is marked by large, conical flowers that taper from a wide base at the stem into a narrow, pointed top. The leaves themselves are a bright shade of spring green with dark green patches and are threaded through with burnt orange pistils. Leaves frequently also show vibrant flashes of purple, ranging from lavender to violet. These hues come about when pigments called anthocyanins are stimulated by colder than average temperatures during the growing process. Amber trichomes are the crowning glory on these colorful buds, giving them a slightly yellow sheen. These are also particularly resinous flowers — handling them will leaves fingers sticky and fragrant. When properly cured, Pink Death Star gives off a very spicy aroma with notes of pepper and ginger. These palate-stinging top notes are grounded out by an earthy and musky base. Grinding up or breaking open the cone-shaped nugs yields skunk and diesel odors, likely due to the Sour Diesel and Skunk #1 in this strain’s genetics. When combusted, it burns with a harsh smoke that can induce coughing and make eyes water. Pink Death Star leaves behind a musky, herbal taste when exhaled. Notably, there are no discernible grape or berry flavors to accompany this strain’s purple color. This is because the pigments that determine Pink Death Star’s color do not have a corresponding effect on its flavor. Finally, this can be a very pungent smoke; those looking to keep their consumption discreet should take precautions. Pink Death Star can be described as a creeper, often taking several minutes after smokers have savored its rich flavor before its heavy effects set in. Users may initially detect a heaviness in the limbs and the sudden desire to sit down in the closest comfortable surroundings. Eventually they may find that muscular tension is eased and that deep breathing comes more easily. Although some mental effects can be observed, these manifest more as a cloudy, dreamy state than any kind of exacting cerebral energy. These slightly psychedelic effects make Pink Death Star a great way to enjoy low-key movies or music. As dosage is increased, smokers may become couch-locked and immobilized. Because of these sleepy vibes, Pink Death Star is better suited to nighttime than morning or daytime use.